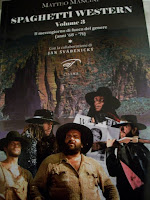 Matteo Mancini, has now published the third volume of the Spaghetti Western saga. He takes the reader by the hand leading him to the rough trails of the Spaghetti Westerns from the year 1968-1971. From the wilderness of "Run Man Run" to the glaciers of "The Great Silence", to the Far East of "The Stranger and the Gunfighter", hisses, applause, laughs and clatter of horse’s hooves galloping accompany the reading, all preceded by a thorough introduction by Jan Vabenicky where countries east of the Iron Curtain are opened, in their own way, to the genus, producing their own westerns. It is the encounter between two worlds, East and West, politics and cinema, capitalism and socialism, all under the filter offered by entertainment, which is more or less instrumental, dressed in western spaghetti sauce is offered to the reader and the meeting of different cultures.