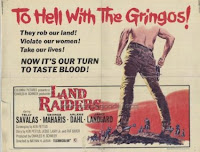 In the opening scenes of Land Raiders (cut from some releases including most TV versions), George Maharis’ character Pablo Cardenas is seen in a Mexican cantina where he gets into a fight with some toughs in a cantina a local hard case named Arturo who is the leader of the  these toughs is impressed with Pablo and two become friends. Arturo escorts Pablo to the American border and disappears from the film. 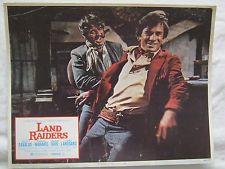 Later in the film we’re introduced to Vicente Carden’s right hand man Carney.
Both of these characters Arturo and Carney are played by Paul Picerni. It seems the original actor signed to play the role of Arturo showed up drunk on the day of his scene and he could not remember his lines after many takes they asked Paul, who was on the set watching the filming, if he could play the part. He said as long as it was alright with Telly Savalas he’d do it. Telly said it was fine and they disguised Paul under heavy make-up and a scar so he’s only recognizable if you play close attention. 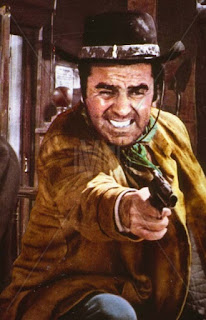