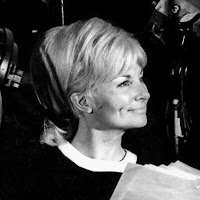 Best known as the voice of Lady Penelope in the TV show Thunderbirds, Sylvia Anderson has died after a short illness on March 15th. Born Sylvia Thamm in London on March 27, 1927, she married Gerry Anderson and the two developed a production company. The pair produced a series of puppet TV series such as Joe 90, Captain Scarlet, Thunderbirds (for which she was the voice of Lady Penelope) and the western Four Feather Falls (1958-1959). As well as co-creating and writing the many series, Anderson worked on character development and costume design. Her career spanned five decades.
Posted by Tom B. at 8:01 AM