We continue our search for film locations for “Bullets Don’t Argue”. After the opening credits we see Billy Clanton ride through the Mexican town to a posada where he enters and has a drink of whiskey. Meanwhile his brother George is playing a game of poker with another man at a nearby table. George calls the man’s hand and he produces three kings. George claims he has a full house but doesn’t show his hand. When the man challenges him George tells him to ask his brother Billy what he has. Billy walks to the table and after looking at George’s hand slaps him and with a nod to the other man suggests he pocket the winnings and leave.

Billy then goes upstairs to his room with George in pursuit. Billy has little respect for his kid brother even after George tells him there is $30,000 dollars in the bank at River Town and they can easily get it because tomorrow the whole town will be attending the wedding of sheriff Pat Garrett and it would be an easy robbery. Billy doesn’t like the idea because it is the town the two brothers were born in. George feels Billy is afraid of Garrett and when he tells him so George grabs him and tells him he’s not afraid of anyone.

Just then the girl singer from the saloon bursts in and George leaves. She tells Billy how glad she is that he is back but he asks her to do him a favor an leave him alone.

The Mexican town used for the scene is Lucainena de las Torres, Spain and is virtually unchanged from the time the film was made. 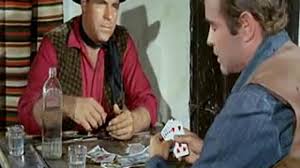