Having lost his uncle, his last living relative, at the hand of Lucky Bear's bandits, Tim Carter decides to enroll in the army as a scout, where he soon finds an opportunity to settle the account with the murderers. Thus begins the long series of adventures whose protagonist is "A boy in the Far West" (this is in fact the title of the series), and which also marked the script-writing debut of Guido Nolitta, alias Sergio Bonelli. As compared to his more classical predecessors, the figure of Tim was enriched by a certain irreverent tone, that would later become a constant element of Nolitta's characters, from Zagor to Mister No. The inevitable "comic relief character" (and perhaps the true protagonist of the stories) is Dusty Ryan, a rather disheveled soldier, a bit of a lazy-bones, not terribly brave, keen on a good drink, often to be found strumming his banjo and singing completely out of tune. Nolitta, who was busy working on other projects, subsequently handed the character on to G. L. Bonelli, who accentuated the action component. The long saga - entirely illustrated with skill and precision by Franco Bignotti, assisted in the final period by Giovanni Ticci, who contributed the pencil drawings for several episodes - had its grand finale in 1975, at the hand of Decio Canzio, on the occasion of its reprinting in the Collana Rodeo collection. By this time, there was heightened civil and social awareness, so that in the last episode was the two companions of adventure begin to distance themselves from the army, whose positions on certain issues they no longer share. 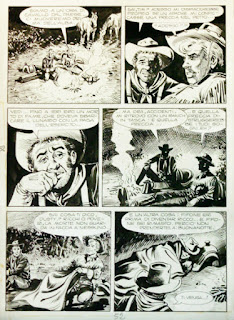 Sergio Bonelli (aka Guido Nolitta) was born in Milan, Italy on February 12, 1932. A child of art: his father, Gianluigi Bonelli, was one of the 'founders' of Italian comics, and one of its most valuable authors; his mother, Tea Bonelli, was a pioneer of' children's publishing. While still very young he attended the craft editors Audace, taking familiar art classes with all the different aspects of the "trade." in 1957, only twenty-five, he takes over the family business as director of the Herald editions. A year after signing a Boy in the Far West, designed by Franco Bignotti, published in Frontier and reprinted several times, this is followed by Judge Bean, drawn graphically by Sergio Tarquinio in 1959 but published only in 1963 in the series of Albi the Cow Boy. The signature that appears in the title of the books it is not Sergio Bonelli, but Guido Nolitta, not his real name, made by chance. This is a very clear choice desired by those who, with a lot of honesty and sincerity, is considered an amateur in authorship, but is considered more properly at ease in publishing entrepreneur books. In 1961 he creates Zagor, designed by Gallienus Ferri. The stories of Nolitta, while easily inserted in the vein of classic adventure fiction, and often willingly enrich a certain light-hearted tone that then turns into a constant of all the characters he creates, to become the distinctive feature of Mister No, published in 1975 designed by Gallienus Ferri and Franco Donatelli in the first two episodes, but then definitively characterized by Roberto Diso. However even in this case Bonelli leaves, perhaps more reluctantly than others, the task of writing different stories for good employees such as Castelli, Nizzi, Sclavi and Ongaro. It's like an author getaway that is within him to better find himself than that of publisher, who in over thirty years of activity has given to Italian readers the opportunity to read stories of timeless heroes like Tex Willer or decidedly innovators like Ken Parker, Martin Mystere, Dylan Dog, Nick Raider and Nathan Never. But even small publishing jewel, such as series Protagonists (1974-75), by Gino D'Antonio the History of the West series, or the prestigious volumes of A Man an Adventure, real training of international talent. It is in this series that in 1977 Bonelli Nolitta-wrote the screenplay of "The 'Man in Texas", designed by Aurelio Galleppini. Without signing them he also writes numerous stories for TEX.
Posted by Tom B. at 5:59 AM