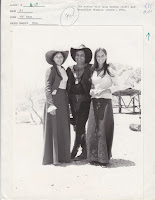 Lawyer and businessman, Leon Charney died in Manhattan, New York on March 22nd. Charner worked through “back door channels” to bring together Israeli Prime Minister Menachem Begin and Egyptian President Anwar Sadat for peace talks at Camp David. The resulting peace agreement – the first ever concluded between the Jewish state and an Arab nation – remains in effect to this day. President Jimmy Carter called Mr. Charney “the unsung hero” of that great accomplishment. Born on July 23, 1938 in Bayonne, New Jersey, Charney went on to become a highly successful New York real estate investor, talk show host and author. For more than 25 years, he moderated “The Leon Charney Report,” an award-winning, nationally televised program. He also wrote five books, including Back Door Channels – The Price of Peace, which was made into a documentary video that won an Emmy. Leon co-produced and appeared as Col in the 1971 Euro-western “Carlos”.
Posted by Tom B. at 7:09 AM