THE ACTRESS WHO FOUND HER CHANCE 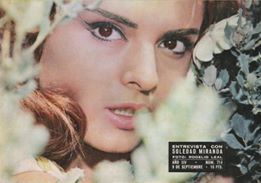 In this revealing interview Soledad reflects on the difficulty of learning to speak without her Andalusian accent. She says that more than once during the rough years she thought about giving up on acting and getting a regular job. But she's not bitter; she says the bad times made her stronger. There are some great photos, including one of Soledad posed in front of a Currito de la Cruz poster in flamenco costume. See the Comments for the original Spanish text.

The actress who found her chance

"The success has cost me very hard years."

Her name is from song of the "military". Could be the godmother of the MAU or of the camp of Robledo, Carrascal or Monte la Reina. Could be a "ye-ye" dress shop girl or employee of department stores used for making sales in August. Could be "Susana" cheerful of night warm with bitter and gin.

But she is an actress, for that of life. "And of vocation. That is carried in the blood." 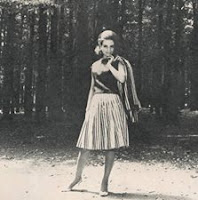 Soledad Miranda. A dark-haired, small and vivacious kid. "From Seville."

And bravo. The salt of the street and the tradition of a Sevilian neighborhood season the impeccable Castilan with which Sole adorns the conversation.

"How it has cost me learn it and speak it well. For I, until very recently, said everything in Andalusian. And that is not 'made' beautiful in the movies. So I had to study and work hard to pronounce correctly. What my hours have cost me."

She tells it nonstop, without thinking too much, playing down the effort.  She tells it with surprising naturalness. With a girl's modesty without sophisticating. She throws the phrases to flight, in the muggy evening that makes the body sweat through the suit, above the smoke of the room.

"I started at eight years." And the eyes of Soledad Miranda half-close.

"I danced, then, for circuses and fairs of Andalusia and in the artistic group of the Galas Infantiles of San Fernando. I gave off style, sang and danced and the grown-ups laughed." The eyes of Soledad also laugh, without sadness.

"Then I wanted to come to Madrid. I had to make the jump from Seville to the capital. I was at sixteen years. I gave the goods and with heaven above and earth below I planted myself in the station of Atocha."

They were very hard years. Days without a break from here to there, on one hand or another. Working where supplied to earn some duros with those that go on moving the tooth. Soledad sang the same as danced. She was nibbling on the road to success. Chirping softly rose up, on tiptoe, in fame. 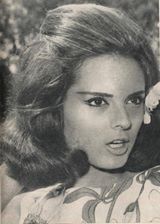 "But I was not taking it well. I was not happy. Yes, I did things, little things, while the time passed. And I saw that it was going wrong. That something was failing. More than once I was about to take the total and return to Seville to get a job like my siblings and help the family. It took me many tears to not do it."

And tears endured in Madrid. To weather the storm of mediocrity. Seeing her name in miniature, almost hidden among the big letters of the huge posters, collected in a corner, without lights, without smell of popularity. And more tears when in the morning she had to return home with her hands empty of the eagerly dreamed...

"But I overcame and I stayed. I had very hard days. I changed my representatives. Then I started making films. Unimportant little roles. Four words and it ends. I danced in 'The beautiful Mimi'. Then I made 'Cradle Song'. I suffered because I wanted to climb up faster... But now I do not regret anything of the bad times. Really. It's toughened me and made me value more the place which I've reached by my own effort."

There is no conceit in the words of Soledad. She counts that which has happened in her life: the illusions, the dreams, the reality...

"I can now say that I have appeared in thirteen movies. The most important, without doubt, 'Currito of the Cross'. Currently I have three projects in perspective but in the cinema now we know that until signing contracts nothing can be taken for certain."

Soledad, the daughter of humble family who wanted to be an actress since God gave her reason, can now say that she has achieved it. That she has entered, head-on and by right, in the path of fame. By her own will and by her own efforts.

"Every day I rehearse for four hours. I go to the home of Herreros, my agent, each evening and prepare the scripts, take classes of pronunciation, painting..."

Because Sole has begun to draw - "I who can't make a straight line" - and shows me some drawings in red and blue simple, spontaneous, of strong strokes.

"I do not want to be pigeonholed. I'd like to do all sorts of roles, comic or dramatic. I demand a lot of myself and I am very critical of myself.  Continuously and in every job."

Have you been given many opportunities?  ... "I think that like to everybody else who begins. What happens is  that people do not have confidence in the young. They don't have major releases. A ready-made 'star' is preferred. You have to go gradually..."

This is Soledad Miranda, godmother of "maletillas", film actress and beautiful by the grace of God, the kid who cries before the cameras without tricks.

At 8 years, Soledad began to dance in circuses and in the artistic group of  Galas Infantiles. 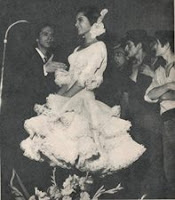 "More than once I was about to return to Seville and get a job like my siblings."
Soledad has appeared in thirteen movies. Now her name already appears with large print on the posters.

One of her hobbies is painting. She has now begun to take drawing classes.
Soledad does not want to be pigeonholed. She wants to perform all sorts of roles. She is demanding and very critical of herself.