Originally this was not released as a Sabata film. The original Italian title "Indio Black, sai che ti dico: Sei un gran figlio di...",  translates as "Indio Black, you know what? You're a big son of a...", with Indio Black being played by Yul Brynner a character that looks nothing like the Sabata character. When “Sabata”, with Lee Van Cleef was made the previous year and with the same director and many of the same crew and cast members appearing in Indio Black, it was changed to Adios, Sabata to cash in on the success of the previous film. Van Cleef di return the following year in “The Return of Sabata”. 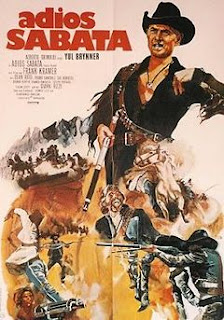