How many Djangos are there ?: The hero of the 'spaghetti western' and its German clones

Why the 'cowboy' Franco Nero and Sergio Corbucci starred in 54 movies? Descacharrante discovered a plot of meanness, false sequels and 'creative' translations. 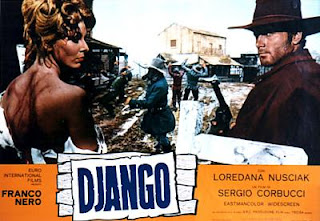 Now that Django Unchained has plunged us into a state of acute Tarantinitis CINEMANÍA has reminded us of other African American cowboys and heroes in Western movies. Nor to seek (and find) tons of hidden nods and winks to moviegoers that Quentin Tarantino has poured into the film, true to his customary stories. In this writing, where the love of the spaghetti western series, we have been wondering how many films were staged by the original Django, the cowboy of few words, played by Franco Nero in the film by Sergio Corbucci. And, considering the list of Spaghetti-western.net, the answer was ... 54 films. Way too many to organize a marathon with friends.

What could have caused this? Did he give time to Corbucci, who directed 60 films according IMDb- in 40 years, shooting other films between both Django? What's more, if you stick to the release dates of movies, the saga of Django extends until 1998. But if we stick to its listing in the database, Franco Nero has shot other films in his career, even television series. And, you know, we've never seen the making of an elderly cowboy. The fact is that a cursory investigation has led us to the causes of this phenomenon, which they had so much to see the rapacity of producers and distributors with few scruples.

To begin with, we must consider one thing: although Franco Nero was the interpreter of the original Django, a search on IMDb character shows the result of 15 actors, in films ranging from 1966 to 1970. In this regard we find regulars. In the Tabernas desert is Maurice Polli, Franco Borelli and Gianni Garko ... But Nero was only in the original film, which Corbucci directed in 1965. The reason is that many of you might be imagining: as Django became one of the most successful titles of the spaghetti western, producers of all types and condition were rushed to finance their own "Django" stories. 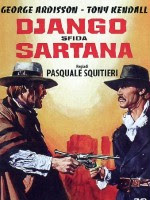 Thus, we find the character in titles like “I am Trinidad” (sorry it has nothing to do with Terence Hill and Bud Spencer), “Django the Bastard” and, above all, “Django Challenges Sartana”, a crossover with another emblematic figure of the genre to which, moreover, was played by Gianni Garko. When he was not busy doing Django, we mean. The only official sequel to the 1965 film was “Django Strikes Again” in 1985, and which is revealed to us that, after fighting the Klu Klux Klan, the gunman went onto become a monk. Just like Stallone in Rambo 3.

But this is not enough to fill the massive list of apocryphal Djangos. What is the reason for such multiplication? For another equally simple answer: the 'creative' translations of titles, especially German. Because, in the Teutonic country, the Italian westerns made in Almería were all the rage, and the success of the first Django motivated distributors to put the name of this hero to any film with a trigger-happy hero with few words. Whereupon, “Il mio nome è Mallory ... M mean morte” was rebranded as “Django - Unerbittlich bis zum Tod”. The craziest case is found in the last title of the alleged saga, which in Germany was called “Django - Ein Dollar für den Tod”, but whose actual title was “A Dollar for the Dead”. It was a spaghetti homage coproduced by the U.S.A. and Spain, and in whose cast included Emilio Estevez, Joaquim De Almeida and Jordi Molla.

As you can see, the spaghetti western world is not only exciting for its films: but the amount of chicanery used to monetize those films tending to zero budget was infinite, and gives to its own reports (like this). In fact, Django was not the only hero of the genre to which similar characters was given a similar treatment: other classic heroes such as Sartana, Ringo (Giulianno Gemma) and Sabata (Lee Van Cleef) had to put up with the creation of their clones, both in Germany and in Spain and the U.S.A.. Moreover, the total list of these titles reaches hundreds, between the original and apocryphal: We are confident that Tarantino has seen them all. And, if not most.