We continue our search for film locations for “Bullets Don’t Argue”. After Garrett crosses the Rio Grande and enters Mexico he encounters George and Billy. Billy shoots and kills Pat’s horse and the two outlaws ride away. Now on foot Pat is fired upon and takes refuge behind some Aztec ruins. He finds the shooter to be a young boy named Mike Goddard and his sister Agnes who thought Garret was Santero a Mexican bandit. The two offer Pat a ride in their wagon into Carona where they are headed. He accepts their offer. This location is called Pechina in the Sierra Alhamilla Mountains and was used in several Euro-westerns such as “The Avenger”, “A Train for Durango”, “The Mercenary” and “The Savage Guns”. 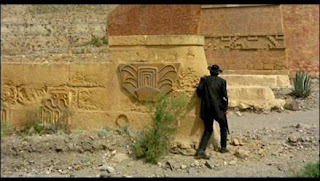 For a more detailed view of this site and other Spaghetti Western locations please visit my friend Yoshi Yasuda’s location site: http://y-yasuda.net/film-location.htm and Captain Douglas Film Locations http://www.western-locations-spain.com/
Posted by Tom B. at 6:59 AM