Years ago, it was hip to call him a stupid fascist. The problem was, most people saying that hadn’t bothered to see his movies. Turned out that Eastwood was the hippest one of all.

Clint Eastwood is a screen icon and also greatly admired as a director, particularly in the latter part of his career. But in the mid ’70s, he was seen by some as a right-wing stiff. Robert Ward—whose generous profiles of Robert Mitchum and Lee Marvin have previously appeared here—visited Eastwood during this time and delivers a candid and revealing look at the man behind the legend. The story, complete with a postscript from the author, originally appeared in the stellar compilation Renegades, and appears here with permission from Robert Ward.

Tuco is in a world of trouble. He has this noose around his neck, see, and he is balanced ever so precariously on this tombstone, which is just about to tip over on the godforsaken plain. Miles and miles of sagebrush. Not a human being in sight. Check that. There is one, well, semi-human nearby. Only a couple of hundred yards away, really. The problem is, Tuco’s lone potential savior is the very man who strung him over the hanging tree to begin with. Tuco’s last best hope lives with this squinting, poncho-clad, cigarillo-smoking, black-hat-wearing, lean, long drink o’ water who likes killing better than breath itself. Oh, things do look grim for the sleazy little Mexican hustler. Any second that marker is going to tip over and it’ll be snaperoo city. So Tuco—tough, wily Tuco—is reduced to pleading, belly-screeching for help.

But The Man With No Name is just ambling onward, receding into the purple-speckled sky. The son of a bitch has done that the entire time the two of them have been hustling for gold, just ambling about, squinting and smoking, and every so often drawing crossed guns from underneath his serape and blowing big holes in twenty, thirty, forty guys at a time. And it doesn’t look like he’s about to change now. There he goes, as pleasant and casual as you like, riding slowly, slowly away, His horse’s tail brushes away the annoying desert mosquitoes and you know The Man With No Name is enjoying every second Tuco is twisting, sweating, pissing himself as his sweaty, scumbag life drips away. Oh, Lord, the Man is cool. 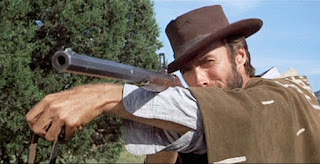 Now Tuco is reduced to twittering birdcalls: “Don’t leave Tuco … don’t leave him … Hey … Hey …”—talking about himself in the third person. He’s already cashing it in. The Man With No Name is just at the crest of an impossibly barren hill. Around him is something that looks like burning driftwood. He turns slowly, ever so slowly, squints into the camera and takes out his rifle. With one hand he brings the sight up to eye-slit level and fires. Tuco’s rope snaps, the mangy greaseball crumbles to the ground. He gets up, starts to run for the hill. The Man With No Name has a heart after all. He hasn’t let old Tuco hang. Now he’ll get him out of this hellhole of a desert. He runs, runs…

But, oh, Sweet Virgeeen, The Man With No Name is turning around again. Receding into the mirages at that slow, sadistic sidle, just fast enough to stay out of Tuco’s reach. And Tuco is running, screaming. “Wait! Wait, you devil. Wait for Tuco!” And he keeps running, as the eerie conch shell music crescendos and The Man With No Name ambles toward the setting sun.

It is 1969 and I am just emerging from The Good, the Bad, and the Ugly, starring this actor I vaguely remember from the TV show Rawhide, a guy named Clint Eastwood. Truth be told, I went to the theater for laughs, because my liberal literary friends across the country had been telling me that the ultimate in moronic mindlessness had been born, the dumbest actor of all time, starring in the most ridiculous movie since Teenagers from Outer Space. So I had gone, stoned on uppers, grass, and Romilar, ready for an experience in High Camp, like seeing The Son of Flubber or the Three Stooges in Spanish {for my money, still one of the primo experiences to be had on TV). What I had in mind was ecstasy; I would get stoned on the purity of the lameness.

But I had been surprised, shocked, stunned. Even through the haze of my chemical aids I had seen something in this discarded TV actor that I hadn’t expected. To put it bluntly, I had been thrilled by the damned movie, and this embarrassed me. I strolled out and tossed off the usual liberal folderol—“He sure does squint good”—but I felt like a coward. For what my frontal brain was telling me and what my visceral reactions truly were … well, Jack, they was at definite odds. There was something about him—that poncho, that cigar, that black hat … the way he held the gun. Goddamn. Though I wouldn’t have the courage to say it, I knew right then that here was the heir to John Wayne.

But more than that, he was also the Rolling Stones; there was a wonderful sadistic/good-guy edge going on there, everything done so damned stylishly that he just had to know that he was overdoing it. (Or did he? No, he couldn’t.) His movies were “spaghetti Westerns,” and it was important not to like anything D-U-M-B, wasn’t it? And whatever else, even the movie crit crowd had to admit that the picture was “visually rich.”

But to hell with that stuff: What had gotten to me was Clint Eastwood. The guy was the Ultimate Legendary Mythic Cowboy, the Stranger from Nowhere. There was a little of Richard Widmark’s Tommy Udo in him, the thrill of the sensual sadist, like Jagger singing “Paint It Black.” Hey, this here Clint Eastwood was one mean motherfucker. (But i’d never tell a soul.). 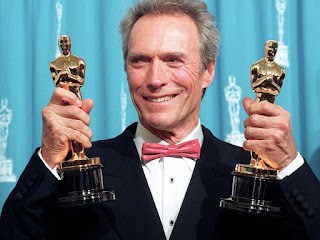 Well, those days are long gone. Clint Eastwood—that maligned, critic-punished, low-graded, scoffed-at, cast-off, spaghetti Western-making, Dirty Harry “fascist” (critic Pauline Kael’s term), male-chauvinist, robot-faced, talentless apex of nadir—has only gone on to become the biggest superstar in the film world. He has been the top box-office draw, or close to it, in nine out of the last ten years. And now even such highbrows as John Simon and Andrew Sarris are grudgingly giving ground. These days it’s a basic tenet of all those with literary pretensions that a “sense of irony” is the common denominator of heightened sensibility. So now critic Molly Haskell is commenting on Clint Eastwood’s “ironic stance.” Just like they used to with Henry “Hank” James and other American Real Honest-To-God Artists. So the worm has turned indeed. No longer do I have to defend seeing Dirty Harry or Magnum Force forty times. Clint Eastwood is okay to like.