The Good, the Bad and Everyone Else 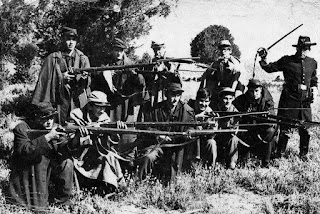 Such was the uproar, and so great the anticipation and involvement of the residents of the region, that for weeks there was no talk of anything else in the province. The curiosity manifested itself from many of the area residents who approached the valley of Arlanza with their cameras to photograph movie stars and the entire troupe that accompanied the project. The fact is that many extras were required for the film and people of the area were hired which lead to even more curiosity and fascination. The 50th anniversary of the filming of The Good, the Bad and the Ugly promises to be one of the most attractive summer events of 2016, and although the programs events it is not yet completely closed, it is known that one of these is intended to show a visual memory of those days of cinema. A large exhibition will showcase a host of rare photographs of the shooting mythical Spaghetti western directed by Sergio Leone and starring Clint Eastwood, Lee Van Cleef and Eli Wallach.

The Sad Hill Association, promoter of this cultural and tourist event, has taken several months in collecting images taken in those days. And the intention is to have the largest display posible. Therefore they are calling upon those who are in possession of images of the shooting to get involved and participate in the project. "Our idea is to create a large file of the memory in addition to the exhibition to mark the 50th anniversary," to explain this dynamic event.

Although official film photographers were Angelo Novi and Divo Cavicchioli, photographers Salas de los Infantes in the region del Arlanza such as as Amando, Geteño and Marlasca also took snapshots "That they sold them to people to make money from the extras as a personal souvenir. So they were taking pictures of all the extras, groups or individual, Southern and Northern soldiers. Many residents came from the local area, but also people from northern Spain who were performing their military service in Burgos and participated as extras in the filming".
Also, of course, they seized the opportunity to portray major players, who sometimes posed with the extras, the sympathetic Eli Wallach, whose randy reputation as a prankster and counterpoint to Eastwood, that showed a more serious and distant persona; somewhere in between Lee Van Cleef, which have been told by those who knew him that he was kind and an excellent whiskey drinker.

The exhibition will offer a unique view of the shooting and what it meant for the entire area, curious images as illustrating this report: Sergio Leone demonstrating how the actors were to wield a rifle; residents of the region attired as Confederates or Unionist, as well as the main actors and the most recognizable and already legendary shooting scenarios: the concentration camp of Betterville, the Lagstone Bridge (which had to be blown up several times until Leone was satisfied), the Mission of San Antonio and of course, the cemetery of Sad Hill, this vast, circular churchyard devised by Carlo Leva and, with around 6,000 crosses, in which several months have been spent months recovering the location by the the enthusiastic association that bears his name ‘Sad Hill’.