Who Are Those Composers ~ Rolf Alexander 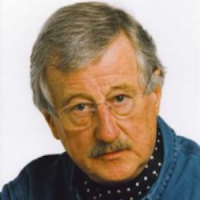 Rolf Alexander Wilhelm was in Munich, Bavaria, Germany on June 23, 1927. At the age of seven Wilhelm started piano lessons. Afterwards he attended grammar school in Berlin and Vienna. Starting in 1942 he studied piano with a special permission with Grete Hinterhofer and musical composition with Joseph Marx at the Wiener Musikhochschule.

His World War II deployment as Luftwaffenhelfer and the subsequent capture as a prisoner of war interrupted his musical career. After the destruction of Munich in 1945 with a Notabitur. He was able to continue his studies and in 1946 passed the school examination in 1948. Among his teachers were Heinrich Knappe (conducting), Joseph Haas (musical composition) and Hans Rosbaud (master class)

Even before that, in 1946, Radio München, the forerunner of the Bayerischer Rundfunk, produced ‘”The Canterville Ghost”, one of its first radio plays after the Second World War. Through the mediation of his brother Kurt Wilhlm who acted as assistant director for the play, the nineteen-year-old composer received his first commission. The work was convincing and Wilhelm advanced to become a busy freelancer for the radio station. He also composed music for the still young medium television for various Zeichengeschichten by Reiner Zimnik, for example for “Jonas der Angler” (1954) and “Der Kran” (1956).

Wilhelm wrote his first major film music in 1954 for the first film of the 08/15 trilogy, which is one of the most successful 0ost war films in Germany. Up to the 1990s, the music for about 60 feature films.

Among his most complex film works is the music for the large-scale German production Die Nibelungen (1966/67). The rhythm and sound schemata of Mars from the cycle of symphonic poems ‘The Planets” by Gustav Holst are now part of the standard stylistic repertoire of the film composers in Hollywood.

Wilhelm has also composed the music for more than 250 radio plays, over 350 television productions and about 300 commercials. In addition, numerous stage musics, orchestra suites and literary chansons were created. For example, he set texts by Kurt Tucholsky to music.

In addition he composed as a young man pop songs under the pseudonym Alex Rolf Ander. His most famous work under this name was Der kleine Eisbär, published in 1951. The use of this pseudonym did not reach the public during his lifetime and was only made public after his death by his daughter Catharina Wilhelm

He was married to the actress Helga Neuner, who became known to a wide audience through numerous theater appearances and the television series ‘Die Firma Hesselbach’.

Wilhelm died at the age of 85 years on January 17 2013 with his family. The artistic estate is kept in the German Composers' Archive in the Europäisches Zentrum der Künste Hellerau