50th Anniversary of the premier of “Arizona Kid”

The film tells about a Filipino named Ambo (Chiquito) immigrant begins a search for his relatives in the Old West. In the process, he goes through a number of comedic sequences involving language problems between himself (speaking Tagalog, the Philippine national language) and Chinese immigrants ... not to mention everyday garden variety cowboys. Through a number of misunderstandings, flattery, and outright deception by people in a small town, he finds himself their sheriff - not knowing that, before his arrival, the town was besieged by a band of cutthroat outlaws who vow to return. This is a problem for Ambo since, by nature, his character is a coward. But, on the search to find his family, he ends up finding something more ... love and courage. 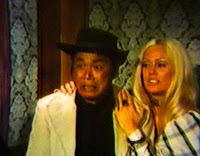