Who Are Those Guys? George Coulouris 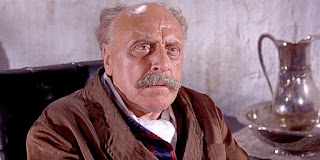 George Alexander Coulouris was born in Manchester, England, on October 1, 1903. The son of a Greek immigrant father (merchant) and an English mother, he ran away from home at the age of 20, intending to become an actor but winding up as a waiter on the liner Majestic.

Eventually he managed to win acceptance to the Central School of Dramatic Art in London. After graduation, he made his London stage debut in 1925 with Charles Laughton in Shakespearean repertory at the Old Vic, and had his first big success in 1926 as Yank in the first British production of Eugene O'Neill's ''Hairy Ape.'' Broadway Debut in Shaw

Mr. Coulouris made his first appearance on Broadway in the Theater Guild's production of George Bernard Shaw's ''Apple Cart.'' In 1936 he met Orson Welles when both had parts in Sidney Kingsley's play, ''Ten Million Ghosts,'' and Mr. Welles invited Mr. Coulouris to join the Mercury Theater, where he played Mark Antony in the celebrated Mercury Theater production of ''Julius Caesar'' in 1937, in which all the characters appeared in modern dress.

When Mr. Welles went to Hollywood, Mr. Coulouris went with him, and acted in ''Citizen Kane'' as Walter Parks Thatcher.

In the 1950s, Coulouris moved back to London and continued playing a range of characters on stage, including Big Daddy in ″Cat on a Hot Tin Roof.″ He once listed his favorite stage roles as Othello, Macbeth and King Lear.

He also appeared in the films ″Hotel Berlin,″ ″The Verdict,″ ″Confidential Agent,″ ″Murder on the Orient Express,″ ″Papillon,″ ″The Antichrist,″ and ″Mahler.″

George appeared in only one Euro-western as Señor Cardenas, the father of Telly Savalas and George Maharis’ characters in 1969’s “land Raiders”.

George Coulouris died in London, England from a heart failure and Parkinson’s disease on April 25, 1989.