Who Are Those Gals? ~ Margo Cottens 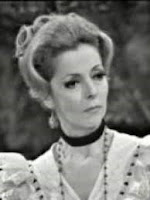 Margo Noemí Cottens Costa was born in Montevideo, Uruguay on January 9, 1922. At the same time, she was attending elementary studies, she took acting classes at the School of Dramatic Art run by Margarita Xirgu. She also studied Architecture, and worked as a draftsman.

However, she ended up dedicating herself to the world of acting and in 1955 she formed her own theater company, together with her husband, the playwright and stage director Rafael Bertrán.

She settled in Spain in 1960, where she developed the bulk of her artistic career. Her first role was in the film "Margarita se llama mi amor" (1961), it was0 a great success with the public that allows her from that moment to appear in dozens of films and television spots during the next two decades.