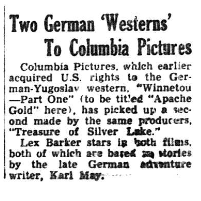 In July of 1965, Producer Sergio Bergonzelli proudly announced he had managed

to sell his recently completed western, A Stranger In Sacramento, to a US TV distributor on July 07, 1965

At first glance one would think that a TV sale wasn't that much to brag about.

For the fledgling Italo western market, it was big news.

It should be stated that after almost a year Jolly Films had yet to make a sale for A Fistful of Dollars.

This delay wasn't just because of the pending Jolly/Toho/Kurasawa rights lawsuit, that hadn't started yet, but because the American's weren't that interested in what they termed imitation westerns.

The Yanks had passed on the first wave of Italian comedic westerns (The Terror of Oklahoma, The Lady Sheriff, A Dollars' Worth of Jitters, The Magnificent Three & Two Against All). Not surprisingly.

Even to this day none of these titles have surfaced in America.

So, the lure of a 'serious western' that starred 'Mr. Jayne Mansfield' didn't appeal to them.

of the Tiber opened.

Even the German Constantin organization had, had trouble placing Treasure of Silver Lake Stateside on March 03, 1965.

It took them three years to find Treasure and its sequel Apache Gold, a home at Columbia Pictures (March, 1965).

Apache Gold had a minority Italian partner, but it's doubtful that the Italians at Cannes, that Spring, were jumping for joy.

So, it must have been a big deal to get a US sale, even if it was just to TV. 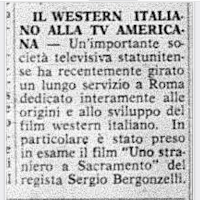