The A.B.C.'s of George Martin - Some thoughts on his passing. 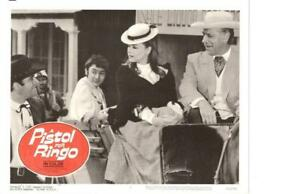 George Martin left Spain sometime after Franco (no not that Franco) died in November 1975.

Whether he was a fascist or not isn't for us speculate.

Either way Spain was about to change and Martin knew it.

The Banks would have been in turmoil, if not in threat of collapse over the death of 'The General', and Martin had money in their vaults.

He took it out and fled to America. There he bought land and thrived.

So, he had money, I guess lots of money, and may have felt troubled by the pending upheaval in Spain.

Better his savings be safe in America, rather in the hands of the new Liberal government.

The Spanish cinema, like its Italian counterpart barely survived the downslide of the Eighties.

That would explain his sudden departure from his homeland.

Stateside, even in Hispanic Miami Martin would have barely been known.

Few of his films got released in English during the sixties-seventies, let alone in Spanish.

Only A Pistol for Ringo got a wide America release.

Remember, video releases & Galavision TV broadcasting of his films were still nearly a decade away (circa 1983).

Perhaps Miami had its own setup of Spanish-language cinemas that imported films from Spain, rather than

Mexico. I would think that the Anti-Castro Cubans in Miami after the revolution would have had more of an infinity for films from Spain, rather than other Spanish markets. Spain and Mexico rarely mixed their film communities.

Over the next two decades, with the advent of video, Martin would have become more recognizable too the average Hispanic Mianite's. He would have felt more accepted in his new city, and even enjoyed the exposure.

Too bad he didn't continue his acting career in America.

RIP Jorge. We enjoyed the ride.