Who Are Those Guys? ~ Walter Coy 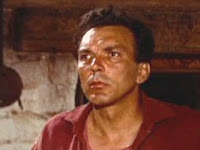 Walter Darwin Coy was born on January 31, 1909 Great Falls, Montana, the son of Theodore Coy, who had a furniture store. The family moved to Seattle, Washington, around 1923.  He played varsity football at the University of Washington and majored in dramatics. Before becamng an actor, he worked at salmon canneries in Alaska. In 1929, he moved to New York. During World War II, he served in the Army. Coy performed on Broadway from 1930 to 1948. He appeared in several early Goup Theater productions. He was the first actor to play Lone Wolf on the radio series of the same name. Coy would go on to appear in over 140 films and TV episodes. Coy died of congestive heart failure in Santa Maria, California on December 11, 1974.