[The actress Claudia Cardinale on the set The Legend of Frenchie King, Burgos]

The actresses Brigitte Bardot and Claudia Cardinale coincided fifty years ago in the filming of the western "Las petroleras" in Burgos and Madrid, an anniversary that will be remembered in September with various tributes.

Co-production between France, Italy, England and Spain - with producer Eduardo Manzanos de Copercines on the local side - the filming of "Las petroleras" ("Les Pétroleuses") began at the end of June 1971 and continued in August and September after a stop for a change of director.

The Burgos association Sad Hill, part of the Burgos Film Commission, has organized on September 4 a guided visit to Salas de los Infantes, where the railway scenes were filmed, at the facilities of the former Santander-Mediterranean line, followed by the screening, with discussion, of the film at the Gran Casino Auditorium Theater.

There will also be a photographic exhibition in the first week of September in that Burgos town that will be added to "Madrid, Territorio Far West", of the Itiner Network of the Community of Madrid, which collects original sketches of the film and is currently touring different Madrid towns. 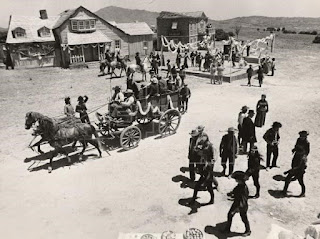 [Set of the film in La Dehesa de Navalvillar in Colemar Viejo, (Madrid)]

The filming of "Las petroleras" went through other towns in Burgos such as Castrillo de la Reina, Cabezón de la Sierra and Rabanera del Pinar.

In Madrid the tributes will be organized by the Madrid association Colmenar Viejo Tierra de Cine. In this community the filming was carried out on some interior sets, and part of the exteriors were shot on a western set by Daganzo and the rest, most of the footage, in the Dehesa de Navalvillar in Colmenar Viejo, where the facades of a ranch, a cabin and another full ranch.

"The Oil Companies" is a western comedy, in the tradition of Terence Hill and Bud Spencer, but with female protagonists. It was seen in its day by 1.6 million viewers in Spanish cinemas and was also a success in France.

There is hardly anything left of the sets, but there is the memory of the passing through those towns of those great stars of European cinema. 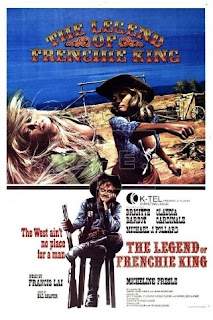 [Poster for the movie “The Legend of Frenchie King”]
Posted by Tom B. at 6:30 AM