We continue our search for filming locations of “Run, Man, Run”. The scene shifts to the prison cell holding Cuchillo and the revolutionary leader Ramiirez. Cuchillo is offered $100 if he will help Ramirez escape that evening. He tells Cuchillo he must get to Texas immediately. Cuchillo asks him has he not been pardoned, “Si.” Will he not be released tomorrow? “Si,” says Ramirez. Watching from outside the prison are a number of men waiting to get their hands on Ramirez in order to collect a treasure. Inside the cell, Cuchillo fakes a severe stomach ache to draw the attention of a guard. When the guard arrives at the cell, he is threatened by the cellmates with a knife to open the door and take them outside. The guard obeys but asks Cuchillo to remove the knife from his throat. Cuchillo laughs and shoves a shaving brush in the guard’s mouth. 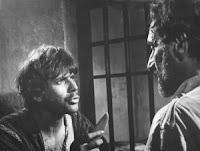 Scene was filmed at a Madrid soundstage.