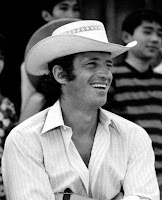 Belmondo and his brush with the Euro Western

Jean Paul Belmondo like many French leading men of the sixties probably dreamed of appearing in his own western. He had seen fellow actor & box-office rival Alain Delon co-star in the American made "Texas Across The River" (Michael Gordon, 10/66). While-singer-turned actor Johnny Halliday starred in the modern-day-crime-meller "D'où viens-tu... Johnny?" / 'Where Are You From, Johnny?' (1963), where he dressed up as a cowboy. Both men would eventually star in their own Euro westerns: Delon in "Red Sun" (1971) & "Zorro" (1975); and Halliday in the Sergio Corbucci hippy-dippy oater "The Specialists" [sic] (1969).

Meanwhile, Belmondo found himself only announced for two westerns: "Remember Abilene" (1967) and "The Jaider Gang meets Doc Holliday" (1972); neither of which when finished featured him.

First up was "Remember Abilene", which eventually turned into "Once Upon a Time in the West" (1968). Italian director Sergio Leone, following his third western, "The Good, The Bad and the Ugly" (1966) had planned on staying with UA, but that was soon to change.

Leone always on the lookout for a new angle to latch on to, had just seen Philippe de Broca's spy-farce "Up to His Ears" (1965), which was handled by UA in UK, but not Stateside [Lopert Pictures Corporation]. Here he got the idea to cast that film's leads, Belmondo & Ursula Andress for his new picture. This would solve his ever-increasing worry over bankability by having a proven box-office couple in the leads.

With United Artists president, David Picker on his side Leone started preparations. Filming would be entirely done in the United States [see attached item].

Presumably Mr. Belmondo & Miss Andress, and their agents, were advised of the pair's casting choice. Variety ran with it.

As "Abilene" developed, Leone soon soured on staying with UA. He had learned of the trim jobs performed on both "A Fistful of Dollars" (12/66) & "For a Few Dollars More" (05/67), and was leery of staying on board. 'He would later learn that UA was also in the process of butchering "The Good, The Bad and the Ugly" (06-12/67), by cutting a good twenty minutes from the film's running time, which infuriated him. Most of the removed footage involved actor Lee Van Cleef. Leone and his future partner Paramount wouldn't fare much better with their, infighting.

Leone, in mid 1967 having learned that UA was tinkering with his films, jumped ship, by signing with a different US production giant: Paramount Pictures. The Gulf & Western owned Paramount of course was eager to get him into their fold. They of course had offered Leone a fistful of dollars more than UA had, and gave him carte blanche over his decision making. They would later be sorry.

Over the next year as the script came about, the title 'Remember Abilene' was forgotten, and a new title emerged 'Once Upon a Time...There was the West'. Even the setting of Texas, was changed to Kansas. As production ramped up and shooting was planned for Southern Spain, it was brought to Leone's attention that his American advisers were alarmed: the Spanish locations didn't fit the Kansas setting. The script's setting was quickly changed to the more appropriate Flagstaff. Arizona. Oddly, the later Paramount pressbook proudly said the film was still based in Kansas. Even TV Guide Ⓡ throughout the seventies continued saying the film was set in Kansas.

Wisely, Leone listened, and dropped the -new- title, and came up with a number of different variations on what would be finally be settled upon: "Once Upon a Time in the West".

With the film finally before cameras, Belmondo's name was no longer included. His role and that of Andress's were presumably the ones that went to Charles Bronson and Claudia Cardinale.

Mr. Belmondo was left still waiting for his opportunity to make a western.

A couple of years later Belmondo's second chance at being in a western was to be a German production. Shooting again was set for Spain.

German maverick director Volker Vogeler, having made a Bavarian set -bandit western-, "Jaider, der einsame Jäger" aka 'The Jaider against Jaider' / 'The Jaider Gang", started work on a sequel, "The Jaider Gang meets Doc Holliday" aka Yankee Dudler (1973). Vogeler right from the start announced he wanted French leading man Jean Paul Belmondo to top his new film [see attached item]. For this second Jaider Gang adventure, although announced in Variety magazine in June 1972, it's doubtful that Vogeler and his Spanish partner, Elías Querejeta, could have afforded Belmondo's services. His role of Doc Holliday was eventually played by William Berger.

Mr. Belmondo's best known appearance in the US was as a French Foreign Legionaries in the bloated James Bond farce, "Casino Royale" (1967), that starred David Niven & Ursula Andress.

Sadly, he never got to appear in a western.