Who Are Those Guys? ~ Darry Cowl 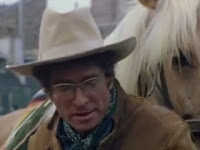 André Darricau as born in Vittel, Vosges, Lorraine, France on August 27, 1925. Usng the stage name Darry Cowl, he came to prominence when he was cast by Sacha Guitry in “Assassins et voleurs” (1956) (Assassins and Robbers). Following this he turned to acting in cinema roles and soon gained celebrity status with his role as Antoine Péralou in “Le Triporteur” (1957) (The Tricycle).

A game addict, he often acted only for money in films that did not stretch his acting ability. He explained this by noting he did not read the script (or, on occasion, know the title) of the work in which he was to act.

He played Major Archibald in the 1974 film Don't Touch the White Woman!.

He had hoped to return to theatre acting in “Hold Up” in September 2005 but ill-health prevented this. At age 80, he died in Neuilly-sur-Seine from complications of lung cancer.

The Magnificent Brutes of the West – 1964 (Tom Callahan/Jackson)