Today marks the 50th Anniversary of the release of “Let’s Go and Kill Sartana” which starred George Martin, Isarco Ravajoli, Gordon Mitchell and Monica Taber. It was directed by Mario Pinzauti. The film is about Nebraska Clay (George Martin) who is attacked by five men, but manages to foil the ambush killing his attackers. The Sheriff (Frank Brana), Carol's (Monica Taber) brother and the girlfriend of Clay, is not entirely convinced that the young man killed in self-defense, and puts him under arrest. In jail, Clay meets an outlaw known as "The Crazy Person" (Gordon Mitchell), who is about to be hanged for murder. When the henchmen of the "The Crazy Person" break into the jail and free their friend, Clay takes advantage of the situation and escapes with them. Pursued by the sheriff, the bandits and Clay begin a long march to a distant mission which holds a fabulous treasure. Clashes with law enforcement and disputes between members of the gang (each of which is eliminated and sharing in the treasure), the lone survivors are Clay and Lena (Virginia Rodin), former mistress of the gang leader. Finding the treasure, Lena also tries to get rid of Clay; unsuccessful, she tries to escape with the precious cargo, but meets a terrible death sinking in quicksand. Finally, the sheriff determine Clay had the right to defend himself during the attack is freed and marries Carol.

** Unfortunately the star of the film, George Martin recently passed away on September 1st. 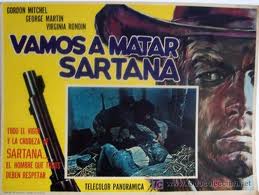