Who Are Those Guys? - Roland Brand 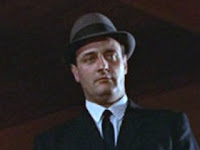 Roland Brand was born Roland Ernest Leptich in Montreal, Quebec, Canada on November 29, 1929. Moving to England his first credited appearance was as a barman on the British television series ‘The Whiteoak Chronicles: Whiteoaks’ in 1955. Brand would go on to appear in over 30 film and TV appearances. He’s best remembered for his roles in “Lolita” (1962), “Chato's Land” and “Fear Is the Key” (both 1972). His last appearance was on the British TV film “Baffled!” (1973) as a race track Mechanic. Brand died in Wigan, Lancashire, England in 1984.