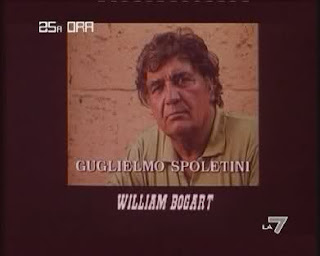 This Italian documentary is a sentimental journey by director Gianfranco Pannone to find the character actors of his favorite Italian westerns of the 1960s and 70s. Pannone tracks down character actor and stuntman William Bogart (Guglielmo Spoletini) to relive the Italian Western days. Bogart introduces him to several of his old pals, former stuntmen and character actors of the genre. They all tell him of the days they played cowboys on the silver screen and spent the money earned on wine, women and fast cars. A trip to several of the main studios of the day and what is left of them in 1998, plus several shooting locations highlight this nostalgic journey for anyone interested in the genre.

The documentary was first show at the Festival dei Popoli in Florence, Italy in November 1998.

Complete Documentary: https://www.youtube.com/watch?v=5QoYEiD-7aM
Posted by Tom B. at 6:07 AM