After a 40 year wait, there was much anticipation for Maestro Morricone’s score for Quentin Tarantino’s new gothic Parlor Room bloodbath , The Hateful Eight, and Morricone has stated he never likes to repeat himself, and thus has given us a truly contemporary piece; no mission bells, cracking bull-whips or whistling, that brought him International acclaim in the early 1960s ,over half a century ago. Instead, Morricone has written 25 minutes of new music for the film and apparently used unused cues and incidental music from John Carpenters The Thing. It's a perfect companion piece to Quentins vision of a very contemporary, darkly politicized version of modern day America, dressed as a classic Western story. Much like The American revisionist Directors of the late 1960s and early ,seventies like Robert Altman (Mcabe & Mrs Miller 1971), Sam Peckinpah (The Wild Bunch 1969), and Italian directors, making similar waves on the political unease like Elio Petri (investigation Of A Citizen Under Suspicion 1970), Gillo Pontecorvo (The Battle Of Algiers 1966) and the ubiquitous Sergio Leone (Once Upon A Time In The West 1968). 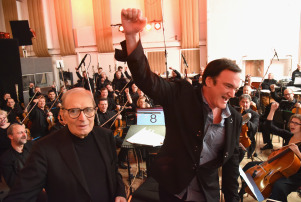 Tarantino visited Morricone in his lavish old-world apartment in the middle of Rome with one prerequisite for the Maestro, 'I want the sound of snow!' Morricone read the script, and wrote an overture.

He produced a prowling menacing, driving score full of impending doom and paranoia, as if violence were about to explode any second, and naturally it does. It's a creeper, and upon repeated listens it opens out fully into a classic Morricone soundscape, with lots of dramatic texture to match the brooding darkly comic tale of eight of the most ornery characters holed up on a snowy hill in a cavernous log cabin/chalet made by the ghost of Carlo Simi.

There are elements of many of his scores, but very subtle, and signature staples and motifs. TheMaestro has once again replicated the bleak and beautiful snowbound landscape as he did with Sergio Corbuccis The Great Silence (1968), one of his best, most haunting elegaic, underrated soundtracks.

The score has already garnered a Golden Globe for the 87 year old Italian Legend, and the Oscars await.

More driven than most musicians/composers half his age, he embarks shortly on a European Tour, My Life In Music where he will perform The Hateful Eight, and pick from his over 500 strong soundtrack repertoire, once again to pick up the baton with a 200 strong Orchestra and choir to entertain his adoring fans. And as he approaches his ninth decade, a film by Giuseppe Tornatore about his remarkable career and life is pending release. Still irascible, and taciturn with a youthful sparkle in his eyes, he sits in his Private study with a sharpened pencil and a blank piece of sheet music, and writes for future generations to love and enjoy....... A true musical Genius, even now surprising us with his unpredictable take on bringing the Western Soundtrack to the forefront of popular culture once again..... 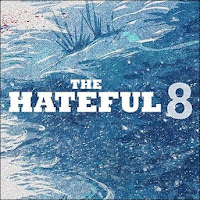 The soundtrack is available currently on vinyl in both Europe pressed by Decca (4769494), and in the United States by Jack White’s Third Man Records. The European vinyl comes in a gatefold sleeve 2x heavyweight vinyl, with 1 poster from the film and fairly standard artwork utilizing snowbound poster artwork from the film and slip cases depicting scenes from the film. The sleeve is of heavy card-stock Matt finish. 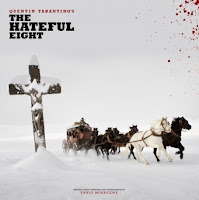 Musician Jack White is well known for his adoration of vinyl, and is innovative in taking vinyl to the next level as an art form. I have to say Third Man Records (TMR364) have knocked this one out of the park with their release. 2x heavyweight 12 inch vinyl LPs in a tri-fold Sleeve printed in a matt finish with spot varnish glossy bloodstains on the image. 2 great posters, one depicting all eight main characters from the film, and the other depicting the six horse team driving the Butterfield Stagecoach through the driving snow. There is also a very high quality booklet 12x12 containing some great stills from the movie. (The Decca release has this stagecoach poster only) The vinyl is housed in good quality anti-static sleeves.

After playing the Decca release the first time, the sound quality was good, but on side 2 there were several faults with very loud clicks. I cleaned the record and tried again, same thing. The record was not wrapped in cellophane, upon purchase. This was a big disappointment. I'm sorry it's Morricone it has to be perfect!

The Third Man pressing however is far superior, very heavy vinyl and the sound quality was far richer, I could hear instrumentation I could not hear on the Decca release. A much crisper 3 dimensional sound.

Third Man takes the crown on this initial pressing of Ennio Morricone’s richly suspenseful score, and in terms of value for the money is far superior down to the high quality well thought out packaging design and superior vinyl quality 10/10 to Mr Jack White!

For European fans the US import may cost a few dollars more, but  believe me, it's well worth it.
A great edition to any Cineastes record collection, and a historic collaboration between two of cinemas most visionary guardians. Seek it out before the Oscars!