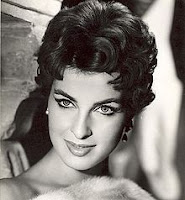 Italian actress Silvana Pampanini died January 6th at the Gemelli Hospital in Rome, she was 90 years old. Pampanini was hospitalized in October and had been operated on for an abdominal problem. Silvana Pampanini was born in Rome on September 25, 1925 and began acting after becoming Miss Italy in 1946. She had huge success in the 1950s and was one of the most famous Italian actresses in the world, before that of Sophia Loren and Gina Lollobrigida. She appeared in one Euro-western: Io sono il capataz (The Return of Pancho Vila) as Rosa de Fuego.
Posted by Tom B. at 7:37 AM