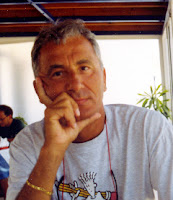 Italian cartoon director and animator Giuseppe Laganà died on January 3, 2016 after a long illness. Born Giuseppe Maurizio Laganà in Milan, Italy in 1944 Laganà started as an illustrator at a young age for Pierluigi De Mas. He then  entered the studio of Bruno Bozzetto collaborating on three historical feature films as "West & Soda" (1965), "Vip mio fratello superuomo" (1968), "Allegro non troppo" (1976). A winner of numerous awards around the world, in July 2015 Lagana was the star of an exhibition-tribute at the Rimini festival "Cartoon Club" with "Dreams of All Colors and Cartoons", a well-deserved if late recognition for his contribution to the art of cartoons and film. Laganà was an animator on 1965’s euro-western animated film “West and Soda” and was the director of the Italian animated television series “Last of the Mohicans” (2003-2007).
Posted by Tom B. at 8:03 AM