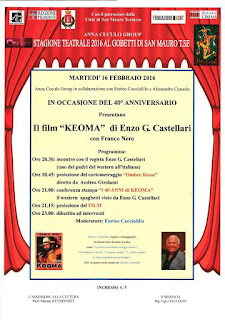 The Master Enzo G. Castellari will be in San Mauro Torinese (Turin) to celebrate the 40 birthday of his film "Keoma".

Enzo G. Castellari is one of the fathers of the spaghetti western, his movies have shown around the world, but among the many films that were directed by the maestro Castellari, surely “Keoma” is what he still loves the most in the heart.

After being interviewed by Alessandro Cunsolo the director of “Keoma” will attend the projection of the movie to celebrate the 40th birthday of his film, the event is organized by the journalist Torinese Enrico Cocciulillo and by the director as well as event manager Anna Cuculo.

Tuesday February 16, 2016, lovers of the Spaghetti Western, will have the opportunity to meet the master Castellari and see and review “Keoma” at the Cineteatro Gobetti of San Mauro Torinese, Turin, Italy

9:00 p.m.
Press Conference: "The 40 Years of Keoma" or the spaghetti western seen by Enzo G. Castellari
Moderators: Enrico Cocciulillo (journalist) and Alessandro Cunsolo (Director of Media)
Hours 10:15 screening of "Keoma"
Hours 11:00 forum and interview
Posted by Tom B. at 5:19 AM