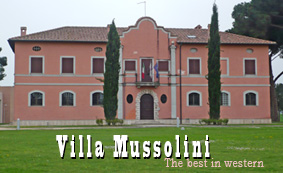 If you are watching a spaghetti western and you see the front of a white villa, by all appearances Spanish style, with porches, a well and a complex of other buildings surrounding it you can rest assured that you have just recognized the Villa Mussolini the most abused house in Euro-westerns. Known as the "Villa Mussolini" because, it was the summer home of the late Italian dictator.

In the years 1967/1968 the villa found itself in an incredible amount of films. Franco and Ciccio, with their parodies, frequently used the setting (see for example Two Rrringos in Texas); It was the haunt of Señor Zorro (where he holds  the sadistic feast which will cost Ray Lovelock his virginity) in Django Kill, a fort in the beautiful 7 in Winchesters for a Massacre; The Time of the Vultures opens in the villa and is explored during the opening credits. The same Sicilian duo used it in The Barbers of Sicily and The Grandchildren of Zorro. 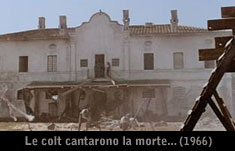 However, it does not make much sense now to describe all the many scenes where you see the villa. Just look at the list of westerns below and have fun trying to recognize the place today, it has changed a lot especially from the point of view for its paint job. Today you can manage to find the house in question in Rome in the Settecamini area, specifically near the Avenue Tecnopopolo, Via Giacomo Peroni. 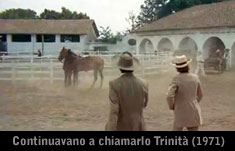 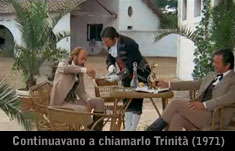 The house is still there along with the other buildings constructed in its vicinity. Lost is the characteristic white color in favor of a soft-spoken orange, but the facade is still recognizable, as is the building with porches that is next with the arcades. The well has disappeared and the square hut placed between the entrance and the villa itself, but most likely they have not been there for some time. The soil that was visible in very western has been replaced by grass, the low wall that surrounded the area was almost completely knocked down and ultimately the place looks more polished now, as a green oasis. 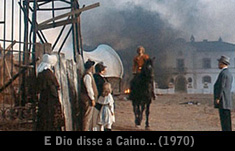