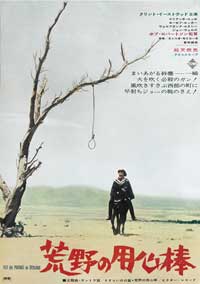 When Sergio Leone was shooting Eastwood’s entrance into San Mguel in Fistful of Dollars, he decided he would like Joe the Stranger to ride past a solitary tree in the desert, with a rope and noose hanging from it. The problem was there weren’t many trees in that part of the Almerian desert, and after much animated discussion drove off with his cowboy hat to find one. Eventually, he came across exactly the kind of leafless tree  he wanted. The problem was, it happened to be growing in someone’s farmyard. So the following day, he returned with a truck and some technicians with the intention of making an elderly farmer an offer he couldn’t refuse. He tells the farmer that they were with the highway department and that the tree was very dangerous and that it could fall down could hurt someone. He told the farmer they would do him a favor and remove the tree for him. They removed the tree and it is seen in one of the opening scenes of the film just as Leone had pictured it. 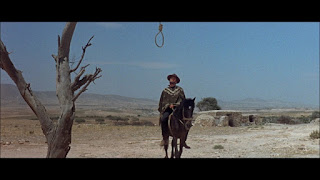