We continue our search for locations for “Gatling Gun”. After Tarpas has left the collapsed mine Chris Tanner continues to make his way through the mine shaft with the diamonds looking for a way out. He finds an airshaft and lifts himself out. Once out he finds the body of Doc Curtis and looking up he sees Ryckert and his men covering him. As he starts to back up Tarpas appears and puts a gun to the back of his head. Tanner turns and grabs Tarpas and the two men fall down a sharp incline back to the base of the mine. After subduing Tarpas and grabbing his gun he shoots several of the henchmen before Ryckert rides up and tells him he’s finished while shooting him. Thinking Tanner is dead Ryckert tells the men to bury the men so there’s no trace of what has happened. Tarpas grabs the money belt with the diamonds and tells Ryckert he’ll get his at Rio Rojo. Tarpas, Ryckert and one of the henchmen then ride off. 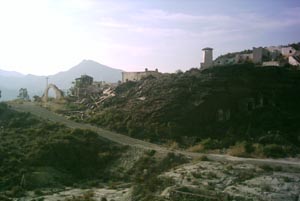 The scene takes place at the entrance to the mine which is again on the backside of the El Condor fort. 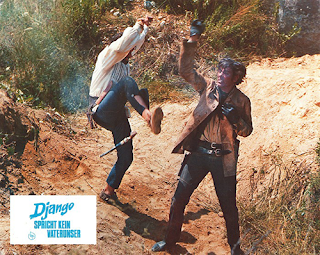