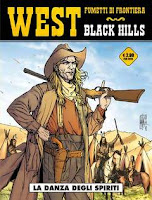 La collana West - Comics border in turn is a sort of macro-series designed to embody inside various comic book series in the western mold. Probably this type of structure is an easy solution to avoid having to rename and redesign every few months warheads Yellow Series.

The first two books of the new series host four episodes that make up the comic Black Hills without having to create a series entitled Black Hills. The name appears in the title of the cartoon series, alongside that of the same series and leaving the rectory down position for the title of the single register.

The third book is of a new comic book, Pioneers (original Le chariot de Thespis, name that unfortunately did not want to keep in the translation, a series of four books published in France in 1982), which begins with the book The Black Indian, the title taken from the second episode of the series published on the same register. Obviously we are still faced with an interesting western series, which is also destined to be short-lived (2 books to accommodate the 4 episodes) and then make room for new comics and new adventures.

The series is periodically suspended to allow the publication of other titles within the Yellow Series and then resumes with new titles. As well as the fifth book of the series, dedicated to pioneers of the New World, which reached newsstands in August 2013.

Generally the comic series are hosted proposals fully and in chronological order. The format of the registers is to Bonelli in black and white with a pagination of 100 pages at a cost of 2.90 euro. The publication is a quarterly. The covers of the series are not from the comics but are especially made by Alessandro Vitti.

27 books have been released with the August 2015 in so far released Cosmo Series of 38 books. 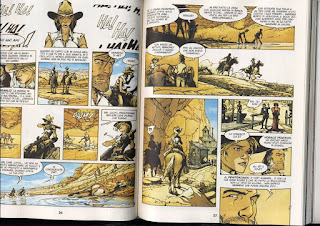