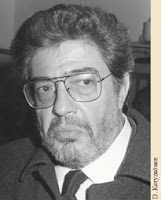 Renowned Italian director and screenwriter Ettore Scola died in Rome on Tuesday January 19, 2016. He was 84. Scola was born on May 10, 1931 in Trevico, Campania but moved with his parents to Rome as a small child. There he became one of the greatest directors and screenwriters of Italian cinema. He was known for Il Sorpasso (1962), A Special Day (1977) and The Dinner (1998). His one Euro-western was as a screenwriter on The Terrible Sheriff (1962).
Posted by Tom B. at 2:28 PM