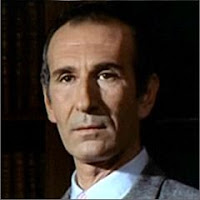 Marco Giusti has reported that Italian supporting actor Umberto Raho died in Anzio, Italy on January 9. He was 93. Raho appeared in 12 Euro-westerns including My Name is Pecos (1966) as Umberto and Pecos Cleans Up (1967) as Pinto, both films starred Robert Woods, The Bang Bang Kid (1967) as Reverend Garrett Emerson Langry, 15 Scaffolds for a Killer (1968) and Drummer of Vengeance (1971) as the Mayor.
Posted by Tom B. at 9:41 AM