Who Are Those Guys? - Bill Brandon 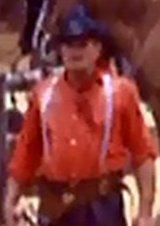 William ‘Bill’ Brandon was a British film actor. He was a supporting and character actor in many British films usually in uncredited parts as henchmen and background players. His first credited role was as Bernard in 1954’s “The Black Knight” and his last known appearance was an uncredited role as a thug in “When Eight Bells Toll” in 1971. The IMDb lists 19 film and TV appearances but according to several British film enthusiasts that is just a small portion of Brandon’s roles. His only Euro-western appearance was as a gunfighter in “Carry On Cowboy” in 1964. Just another in the long line of unsung small bit actors who never got their due.