Who Are Those Guys? - Neville Brand 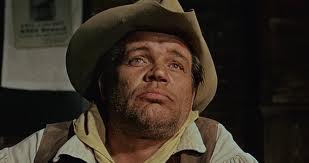 Neville Leo Brand was born in Griswold, Iowa on August 13, 1920. A real-life war hero who made a film career out of playing tough guys in such movies as "Stalag 17" and "Birdman of Alcatraz. He appeared in more than 40 films, but is probably remembered best for a role on the small screen. In the late 1960s NBC television series "Laredo," Brand played the rowdy, gravel-voiced Texas Ranger Reese Bennett. "He certainly enjoyed the role," said his daughter, Mary Raymer, who lives in Dixon, Ill. "It was a chance to add a little humor to the tough guy he always played."

He portrayed gangster Al Capone several times, first in "The George Raft Story" in 1961 and in "The Scarface Mob" a year later. He also played the mobster on the TV show "The Untouchables," which was set in Chicago.

Raised in Kewanee, Ill., Brand joined the Army after graduating from high school and was discharged in 1946 as the fourth most decorated GI of World War II. Neville was regularly cited as the 4th most decorated soldier in WWII, but that information is incorrect and was denied by Brand before his death. He was, however, according to official military records, the recipient of the Silver Star for gallantry in combat. His other awards and decorations are the Purple Heart, the Good Conduct Medal, the American Defense Service Ribbon, the European/African/Middle Eastern Theater Ribbon with three Battle Stars, one Overseas Service Bar, one Service Stripe, and the Combat Infantryman's Badge.

After the war, he went to Los Angeles and attended the Geller Drama School on the GI Bill. His first big break came as a gun-happy hoodlum in the 1950 thriller "D.O.A." with Edmund O'Brien.

Three years later, he played an American prisoner of war who suspected William Holden of being a Nazi plant in "Stalag 17."

In a 1975 interview with The Times, the craggy-faced actor admitted that he turned to alcohol when he could not live up to the tough-guy image he attained after his war heroics.

"The booze became medicine, man," he said. "Suddenly you're not drinking to get drunk anymore. And the only way you can hit the morning--I used to call that just getting even--is to grab that jug. I'd have a pint of whiskey in the morning just to make a phone call."

His first leading role came in 1954 with "Return from the Sea," the only romance movie he made.

His most acclaimed film role was as a convict in the 1954 prison drama, "Riot in Cell Block 11" and he played opposite Burt Lancaster in 1962's "Birdman of Alcatraz."

Brand died of emphysema in Sacramento, California on April 16, 1992.