Comin' At Ya! soon on DVD 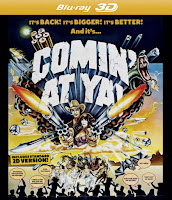 Whenever a plate of spaghetti is comin’ at ya, you’ll duck . . . no matter how delicious the pasta may be. But when a Spaghetti Western as tasty as “Comin’ at Ya!” is comin' to DVD and Blu-ray, welcome the treat. Indeed, the fan-favorite spaghetti western will be feasting on the cult clsssic’s 35th anniversary re-release that includes its debut on Blu-ray 3-D. Directed by Ferdinando Baldi and written, produced and starring Spaghetti Western legend Tony Anthony, “Comin’ at Ya!” is largely credited with the 3-D revival in the early ’80s (think “Friday the 13 Part III 3-D", "Jaws 3-D", "Parasite" and "Amityville 3-D). The deal was negotiated by Eric Wilkinson for MVD Entertainment Group and Robbie Little of The Little Film Company on behalf of the filmmakers.

Independently produced, "Comin' at Ya!" was originally released theatrically in 1981 by Filmways Pictures and went on to gross more than $12,000,000 domestically in only 200 theaters in North America . . . that's a staggering $30,000,000+ in 2016 dollars when adjusted for inflation, long before independent films were a regular staple in multiplexes. "Comin' at Ya!" happily embraced the 3-D technology of its time, not only taking advantage of the depth that the technology provided, but also taking every opportunity possible to throw, shoot and point things at the viewer at every possible turn.

"In the '80s 'Comin' At Ya!' was the first 3-D film distributed by a major company since the '50s and it went on to set box-office records and turned Hollywood and the world onto 3-D once again", explains Tony Anthony. "Films are strange, live-for-ever works of art, and as a producer and writer, this is a labor of love. To be able to restore this film with the new technology that's now available, I'm thrilled to finally be able the present this film the way is was meant to be seen."

The new home video version of "Comin' At Ya!" was supervised and produced by Anthony and Tom Stern, through Anthony's company Sternco 3D. Sourced from a new 4K master, "Comin' At Ya!" boasts a frame-by-frame digital conversion of the polarized over-and-under format of the original print, sourced from a brand new internegative into the MVC 3-D format and new 5.1 surround sound.

Eric Wilkinson, MVD Entertainment's Director of Acquisitions and Sales shares Anthony's excitement about the flick's anniversary re-release: "I remember this film from when I was a kid," he recalls, "and I also remember my parents telling me I wasn't allowed to go see it because of its R rating. I finally did get to see this on home video in a less-than-desirable full frame transfer on VHS. I loved it, but always wanted to see this the way it was meant to be seen in 3-D. As a both an acquisitions executive and a fan, I chased this film for years. I'm thrilled to be working with Tony and Tom and bring this back to home video the way that it was meant to be seen. The 3-D looks amazing! At one point during the film, I actually ducked!"