He was Trinita, Django, Lucky Luke, Don Matteo or even Nobody. But today, Terence Hill is at the head of an ice cream parlor that has just set up shop in Paris.

Nothing better than a good ice cream in the middle of a heat wave like Paris is experiencing this summer of 2022. Since the beginning of July, the capital has also had a new ice cream parlor in its ranks with the Gelateria Girotti behind which hides a famous actor.

He formed for years a famous duo in spaghetti westerns but it is in ice cream that Terence Hill does business today. Mario Girotti, his real name, was still a child when his grandfather's brother ran the Girotti ice cream parlor in the village of Amelia in Umbria.

When his great-uncle died, the Gelateria Girotti unfortunately closed its doors.

According to the story told by the company, it was in 2015, when he was walking with his grandson in the streets of Amelia, sending the latter's enthusiasm in front of the store, that he decided to reopen it. This was done in 2017.

Girotti then exported to Germany. In 2022, after Amelia, Dresden and Berlin, the Hill family opened Girotti in Paris in the heart of the 6th arrondissement. 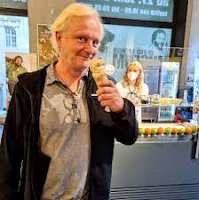 Girotti, opened its doors on July 7, 2022 at the exit of the Notre-Dame-des-Champs metro station. It is at 120 rue Raspail in the 6th that we dive into this world where the improbable alchemy between pastry and cinema operates, screenings of traditional westerns with his sidekick Bud Spencer, film posters, reminding us of this joyous period of films Italian spaghetti, so it is in this atmosphere that we discover creamy ice creams with surprising, original flavors such as red beans and maple syrup or rum baba. The ice creams are all made in Umbria in the Girotti workshop, guaranteed gluten-free and without preservatives, 100% natural. With sometimes surprising tastes of chili or gorgonzola…