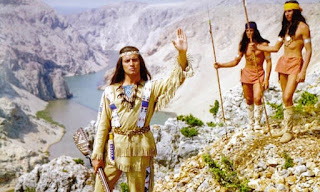 A German publisher has announced it is withdrawing two new books paying tribute to a highly popular character in children’s fiction after facing accusations of racism and cultural appropriation.

Ravensburger Verlag, a leading publisher of children’s books in the German-speaking world, said its latest books on Winnetou, a fictional Native American hero who made his debut in 1875, would be pulled from its schedule and that it would also be considering whether to continue publishing other Winnetou titles in future.

Bookshops have reportedly been stopped from ordering the books from Ravensburger and they also appeared to have been pulled from Amazon on Tuesday. Editions by other publishers were still available.

The publisher said it was reacting to “many negative responses” to its publication of the books aimed at the 7+ age group, related to a recently released feature film called “The Young Chieftain Winnetou”, including one for learner readers.

The publishers’ move has sparked a debate over whether the film should also be pulled.

Karl May, the creator of the novels, who died in 1912, is considered to be the first bestselling author in the German-speaking world and is one of the most successful German writers ever, based on sales. His books, which started life as serial novels in newspapers and penny brochures, have sold around 200m copies worldwide and been translated into 40 languages.

The stories focus on the friendship between the character Old Shatterhand, a German immigrant to the United States who is the first-person narrator of them, and Winnetou, an Apache leader and his blood brother. They have spawned numerous films, referred to as “sauerkraut westerns”, theatre plays and popular festivals, which took place in both East and West Germany during the cold war and have continued to be held across Germany since reunification. The most popular, in Bad Segeberg, attracts about 250,000 people a year.

The novels were so popular the Nazis refrained from banning them, despite misgivings over the way they were seen to contradict their racial ideals by celebrating people of colour. Even Adolf Hitler was said to have been a fan.

May, who is considered the alter ego of Old Shatterhand, made much of his travels to the American west – displaying a necklace of bear teeth as proof he had been there – even though he did not travel outside Germany until years after his first publishing success and visited America only once he was well into his writing career. Even then, he did not venture further than Buffalo, New York. He is credited with fuelling the imaginations of generations of young Germans, particularly before the days of mass foreign travel, and of nurturing their fantasies about living close to nature.

But a heated debate on social media in particular has accused the Winnetou books of reproducing racist stereotypes originating in colonialism, as well as of cultural appropriation in their depiction of traits of Indigenous people.

The decision has split social and cultural commentators. Supporters of the move have described May’s literary attempts to conjure an idyll in the country of origin of the Indigenous people of North America as a “lie, which completely edits out the genocide of the Indigenous people, the unjust settlement of their land by white settlers and the destruction of their natural habitat,” according to Die Zeit, summarizing the angry response.

The tabloid Bild meanwhile has led the calls for the books to be reinstated, insisting that “woke hysteria” was responsible for “burning the hero of our childhood at the stake”.

The head of Ravensburger Verlag, Clemens Meier, said the books had to be viewed through the perspective of historical reality, against which they displayed a “romanticised picture with many cliches”.

In a statement, the publisher added: “It was never our intention to hurt other people’s feelings with these titles. Our editors are intensely mindful of topics like diversity or cultural appropriation.”