The Western returns to the Cortijo del Fraile, in Níjar [archived newspaper article] 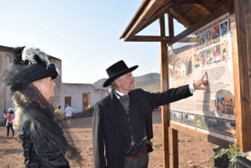 The representation of the film "Once Upon a Time in the West" has served to inaugurate the new information panel of the Nijar cinematographic route.

One more year the passion for cinema and the past linked to the seventh art has reached the municipality with the activity, which is consolidated as a tourist resource in the municipality, organized by the Níjar Film Office, dependent on the Department of Tourism, Heritage History and Beaches in collaboration with Manuel Hernández, from the Hotel Rural Alba de Los Albaricoques.

Thus, the Cortijo del Fraile has been the scene of the representation of some scenes from the western “Once Upon a Time in the West” by the great director Sergio Leone, carried out by the non-profit Association of Actors and Specialists of the Antonio Ruiz Escaño team. (known as the Leone Child),

As in any film of the genre, there was no lack of horsemen, shots and action that surprised the public, many of them dressed for the occasion.

At the end of the performance, the new informative panel of the Fraile farmhouse was inaugurated, an act in which the Councilor for Tourism, Alexis Pineda, explained that "with this panel, the seventh completes the signage of the Níjar cinematographic route, which includes Los Albaricoques and El Campillo, places known for being the scenes of great films and that are visited by many lovers of the seventh art”.

In the new poster you can read a brief summary of the history of the farmhouse, in several languages, and a tour of the films and series recorded in the place from 1965 to 2008.