After Paco let’s the Federale general go Paco’s gang raids another town and then settles down to count the money they have collected to support their cause. 20,000 gold pesos, $10,000 from the train. Sergei butts in and says $5,600 four weeks salary for himself. One of his men shows Paco a chest of stolen gold goblets, jewelry etc. and Colomba embarrasses him by telling Paco no leader of the revolution should be embarrassed for what he’s collected but that Roman has stollen the material from the peons and calls him a thief. Suddenly they hear music and the town officials and villagers have come to honor Paco and his men for liberating their town. This was filmed in Polopos, Spain. 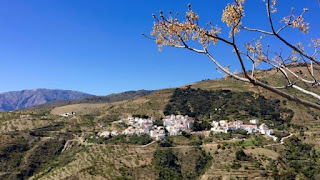