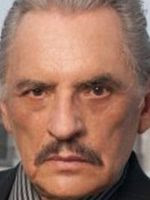 Mexican actor Manuel Ojeda died on August 11, 2022. He was 83. He was born on November 4, 1940 in La Paz, Baja California Sur. He studied acting at the National Institute of Fine Arts in Mexico. He began his career in the 1970s in the cinema, his first films were 'Canoa', 'El Elegido', 'La casa del sur', 'Calzonzin inspector', 'Celestina' and 'El apando', the latter gave him his first Ariel nomination in 1977. Thanks to his talent, he won several awards in film, television and theater, including an Ariel, awarded by the Mexican Academy of Cinematographic Arts and Sciences, as well as El Heraldo de México, a Golden Caliph and several TV Novelas. Ojeda appeared in one Euro-western 1979's "Eagle Wing" as Manuel with Martin Sheen and Sam Waterston.