Today marks the 50th anniversary of the release of “Too Much Gold for One Gringo” directed by Juan Bosch and starring Anthony Steffen, Fernando Sancho and Daniel Martin. The story is about Jonathan Carver (Manuel Guitián), a former transporter for a mining company, who took advantage of his profession by one day stealing 28 bags of gold. Sitting in the County Prison for 20 years he has jealously guarded the secret of the hiding place and now, at the end of his sentence, he is awaited by the gunman Trash Benson (Anthony Steffen), Mr. Trevers company, and four other greedy bandits. Aided by Trash and the Mexican Paco (Daniel Martin), his cellmate, old Carver (Manny Gel) manages to elude the bandits and dies of heart failure. Led by a clue found by Molly (Irene D’Astrea), the temporary allies, Trash and Paco, cross the border into Mexico and travel to San Fermin, the village where the statue of the saint of the same name, is fervently worshiped by the people. Carver has hidden the gold in the statue. However, they have been preceded by the revolutionary bandit Firmin Rojas (Fernando Sancho) and they themselves are promptly followed by the bandits. When the battle grows fierce, Trash and Paco risk their lives over and over again. When all the outlaws are killed and many of the villagers needlessly sacrificed, Paco deserts Trash; leaves a portion of the gold to the villagers and runs away from his friend.

The film grossed 230,088 lire during its initial release.

They Believed He was a Saint – English title

Too Much Gold for One Gringo – English title 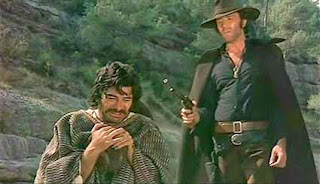