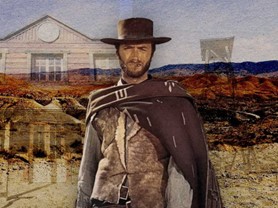 There are few movie genres that are so inextricably tied to a place and time than the western, fit with cowboys, saloons and gunslingers. Reflecting the values of liberty, justice and courage that the country itself holds so dearly, the genre was made popular throughout the early decades of Hollywood where filmmakers such as John Ford, Howard Hawks and Sam Peckinpah created the cornerstones of the artform that are still celebrated to this very day.

Whilst such aforementioned American filmmakers kickstarted the genre, by the mid-20th century their influence was waning and the Italian director Sergio Leone stamped his own mark on western cinema, providing a European take on the patriotic genre. Inspired by Akira Kurosawa in addition to John Ford, Leone brought an iconic style to his western trilogy that included A Fistful of Dollars, For a Few Dollars More and, his masterpiece, The Good, the Bad and the Ugly.

Known as ‘Spaghetti Westerns’, the Italian movies of Leone and more tried to emulate the great plains of America, in spite of them being filmed in several locations across Europe. One such location was Spain’s semi-arid Tabernas Desert, located within the south-eastern province of Almería.

Sharing several similarities to deserts in the southwestern United States and northern Mexico, the location became a popular spot to shoot western movies ever since the 1950s. Hosting countless Spaghetti Westerns, the spot was so ubiquitous with the form of filmmaking that three significant studios were built on its grounds, donned Texas Hollywood, Mini Hollywood, and Western Leone.

Now known as Oasys, Mini Hollywood, once a movie set, is a Spanish Western-styled theme park located near the town of Tabernas in Almería. Originally designed by the Italian architect, and production designer, Carlo Simi, the faux town was built for Sergio Leone’s For a Few Dollars More in 1965 and was later used for multiple other movies, including the director’s 1966 film The Good, the Bad and the Ugly.

Once the filming of Leone’s 1966 movie was complete, the extras clubbed together and bought the set, running it as a tourist attraction until a hotel group bought them out many years later. Still running to this day, the park features daily cowboy stunt shows, mock bank raids, an abandoned gold mine and a western-style saloon.

More recently, in 2012, the BBC production crew of Doctor Who took to the location to film the episode A Town Called Mercy. 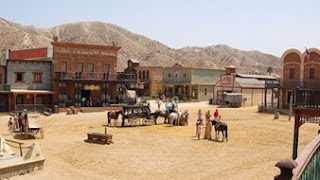 Another western-style theme park in the Spansih province of Almería, Texas Hollywood was bought by Rafa Molina in 1977, a stuntman who purchased the land for $6,000 to improve his job prospects. It wasn’t until the early 1980s that he would start charging everyday visitors to tour the set, with Molina organising mock shoot-outs and barroom brawls among other immersive attractions.

Differing in architecture, Texas Hollywood features two different styles built beside each other, with one side showing a typical American Old West aesthetic, whilst the other embraces a Spanish theme. The Western side features a blacksmith, jail and gallows, whilst on the reverse side, the Spanish set features a town square, church and more. The tourist attraction also remains an active film set, with the television series Queen of Swords using the space in 2000. 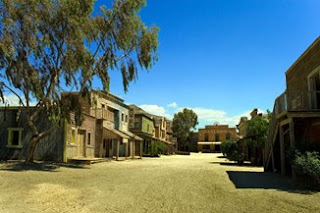 The smallest of the three faux towns, Western Leone was originally constructed for the Sergio Leone movie Once Upon a Time in the West in 1968, with the iconic large red house, used frequently throughout the movie, becoming a significant tourist attraction in the area. Used for multiple other spaghetti westerns, not far from Western Leone a fortress was built for the film El Condor, though the site later fell into disrepair.

As of March 2022, Western Leone is up for sale, so if you fancy putting on a western spectacular of your own, why not make the extravagant purchase yourself? 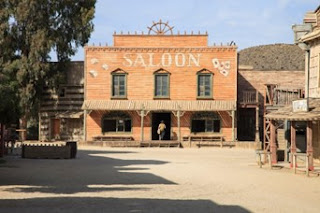