Who Are Those Guys? ~ Frank Curiel 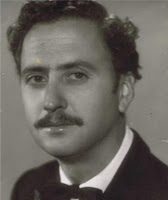 Born Fernando Curiel Espinosa de los Monteros in Empalme, Sonora, Mexico on June 17, 1915. He studied medicine for two years and worked as a cartoonist, composer and singer. He first appeared in films in 1940 as Francisco in “Los olvidados de Dios” directed by Ramón Pereda. He’d go on to appear and direct in close to 80 films including many horror films, Santo and Blue Demon adventure films. until his death on June 21, 1968, in Mexico City. He was married to fashion designer Teresa Defossé and the couple had four children. Fernando appeared in a dozen western films but only one Spaghetti western “Vengeance of Pancho Villa” starring John Ericson where he used the alias, Frank Curiel.