Who Are Those Singers & Musicians ~ Jan Daley 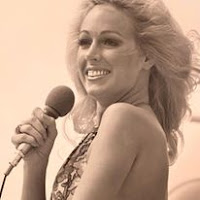 Born Janien B. Daley in 1945, she’s a native of Inglewood, California, Daley took piano and singing lessons and began performing in musicals as a child. As a young adult in the '60s, she was crowned Miss California. The exposure led to starring roles in stage musicals like “Oklahoma”, “Anything Goes”, and “Carousel”, and guest spots on late-night and TV variety shows, including ‘The Joey Bishop Show’ and ‘The Tonight Show Starring Johnny Carson’. She opened on tour for several legendary comedians, among them George Burns, Rodney Dangerfield, Don Rickles, and Bob Hope. Daley went on to accompany Hope on tour, performing to audiences around the world, including U.S. troops in Vietnam, with the Bob Hope Christmas Tour. In 1970, her recording of Riz Ortolani and Arthur Hamilton’s "Til Love Touches Your Life" from the film Madron was nominated for an Academy Award for Best Song.

Daley continued to perform professionally after starting a family, appearing in stage productions in places like Branson, Las Vegas, and Europe, in addition to the Los Angeles area, as well as in dozens of TV commercials. Her original song "Eat Your Heart Out" was featured in the 1997 independent film “The Ride”. In 2003, Daley was asked by the family to sing "Thanks for the Memory" at Bob Hope’s funeral service. She subsequently recorded the tribute album ‘Where There's Hope’ with Les Brown, Jr.'s Band of Renown. Subtitled ‘A Tribute to the Love Songs from Bob Hope’s Legacy’, it was released by Encore Music in 2009.

Daley then released two devotional albums, 2010's ‘His Light’ and 2012's ‘Live’. Also in 2012, she issued her first Christmas album, ‘There's Nothing Like Christmas’. The five-track EP ‘When Sunny Gets Blue’, a collection of standards, followed on LOG Records in October 2016. Six months later, she expanded the EP, adding six original songs for ‘The Way of a Woman’. It reached number two on the Billboard Jazz Albums chart.