Anica page for The Magnificent Stranger (UNIDIS films, August 11, 1966, for an October release).

In 1964 few Italians owned their own TV sets. This was one of the reasons why “A Fistful of Dollars”, which had been released in the fall of '64, did so well. This sudden success of “Fistful” at the box-office surprised both audiences and the film's producers alike. The State-run broadcaster RAI TV, had yet to start showing ‘Rawhide’, dubbed into Italian under the title 'Gli Uomini della Prateria / The Prairie Men'. That didn't occur until around 1967. Still, audiences wanted more of Clint Eastwood.

A second film, if it got made, was still a year away. Then all hell broke loose. Egos were bruised.

Most of 1965 saw the two-feuding groups of ex-friends (‘Fistful's’ producers Arrigo Colombo & Giorgio Papi and director Sergio Leone), suing each other, as well as being sued by Akira Kurosawa and Toho Films of Japan, over their unauthorized plundering of “Yojimbo” (1961). Colombo & Papi even had the audacity to try and sue Eastwood, for doing the second film, without their permission, which they claimed he needed. They said his contract with them extended to any sequels. The Italian office of the powerful William Morris agency, which handled Eastwood worldwide, settled that case in quick order. These misgivings held up the “Fistful's” release in most countries outside Europe (including North America) until late 1966.

During the Summer of 1966, Jolly Films, the original producers behind “A Fistful of Dollars”, lawfully purchased two TV segments, made years apart, of the recently cancelled US TV series Rawhide (1959-1965) from CBS TV. They then set about preparing their 'new' Clint Eastwood film unaware of the brewing storm this would cause. 'Jolly' of course had been shut out of the “A Fistful of Dollars” direct sequel, “For a Few Dollars More” (December 1965), and the third film in the series, “The Good, The Bad and The Ugly” (December 1966), which was still before the cameras at the time, and wanted retribution.

'Jolly' then set out to make their own sequel by using the Rawhide episodes, and, craftily chose “Il Magnifico Straniero”, which had been the shooting title of “A Fistful of Dollars”, for the title for their follow-up.

One can envision 'Jolly' cranking out additional 'new' Rawhide/Eastwood oaters for the next few years to come.

The ruse paid off and “Straniero” bested such local fair as “Arizona Colt”, “The Brute and the Beast”, “A Taste of Killing” and “Yankee” (all August releases that would have been slowing down by October), on its opening sprint. Still, the new “Straniero” served up 'Boffo' returns as Variety put it. At first audiences were probably thrilled at the prospect of a new western starring 'the Man with the Green Eyes', as he was called in Italy. They most likely quickly caught on to the deception, stopped repeat visits, and caused the box-office coffers to dry up.

Legend has it that Eastwood, who was still on the Continent, making his third oater, “The Good, The Bad and The Ugly”, took offence and sued his old employers, and won.

One can see from the Anica page for “The Magnificent Stranger” (August 11, 1966, for an October release), that the Eastwood character's name had not been changed from 'Rowdy Yates'. Oddly one would have thought that 'Jolly' and their dubbers would have just called him 'Il Straniero', to firm up that the film was a sequel to “A Fistful of Dollars”, and also add to the fun.

The attached Anica page would have been typed up prior to the film's release and may not have actually reflected the character's final moniker.

The lag between the Anica date, and the release (three months), was probably when the Italo dubbing had been done, and the character's name could have easily been changed to 'Straniero' to complete the process.

All in all, “The Magnificent Stranger” was sold off to such counties as Argentina, Brazil, Germany, Greece and Spain, before it was withdrawn.

A year later a second 'new' Clint Eastwood film, “El Gringhero” (June,1967, sometimes transliterated to 'Gringohero'), was announced. It was touted in the local press and garnered interest, causing eyebrows to arch.

Industry wags got word to Eastwood that another Rawhide movie was in the works, and again he was none too pleased. This time Eastwood did manage to have the film stopped.

Eastwood took out trade ads denouncing the film and argued that he had never worked for 'Lucas Films of Rome' or for Clarence Brown, an actual American director, who had retired before ‘Rawhide’ had even started production. The courts agreed and the film disappeared out of sight.

Multiple searches for “El Gringhero”, have yet to turn up any visual evidence of this follow-up Rawhide compilation. It mostly never got past the planning stage.

The title, “Gringhero” on the other hand was later used for a Mexican western “Un Dolado de Pancho Villa” aka “A Faithful Soldier of Pancho Villa” that was marketed as “Mexico Amore e sangue per un Gringhero” / “Mexico, Love and Blood for a Gringhero” (June 1968), for its Italian release by Magna Films.

One would think that they would have sent out still sets and ad slicks for both titles. They never resurfaced during the age of video. 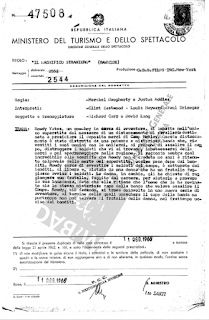 Submitted by Mike Ferguson
Posted by Tom B. at 6:15 AM