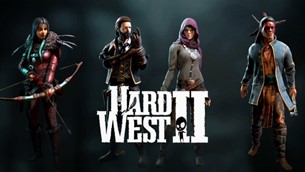 “We approached the task with humbleness and respect,” says Ice Code Games CTO Mateusz Pilski, talking to NME. “We thoroughly analysed reviews and opinions about Hard West one and we spent a great deal of time brainstorming ideas regarding ways to make this game ‘modernized’ and upgraded. We ended up creating a massive document called Hard West Legacy – this document defined the project and allowed us to set clear and solid goals. We also had the opportunity to consult with developers of Hard West, since they’re based in Warsaw just like us.”

Grzegorz Ziemba, lead producer for Hard West 2, acknowledges the team had “pretty big shoes to fill” – especially because of how popular the first Hard West was at Ice Code Games.

“It was exciting, as many of us were fans of the game. We had played it a couple of years back and really jumped at the opportunity to create a sequel,” says Ziemba. “As we knew the game well, we were able to focus our efforts on figuring out…where can we go from here, how can we build upon this great game?”

For Ice Code Games, building on the success of the first Hard West meant more than just rehashing what had worked – the team wanted to bring fresh ideas to the table. With that in mind, Pilski says the “main objective during the design process was to make the game feel as Western as possible” –  even if the concept of a turn-based shootout seemed to clash with the frantic, messy flare of a classic Spaghetti Western.

“Gunfights in western movies almost never look like typical turn-based battles in which you carefully jump from cover to cover, most of the time hiding,” admits Pilski, who says he started production by spending “literally every evening” watching Western films to get a handle on the genre.

“Western fights are more fast-paced, bold, full of bravado,” he added- and to capture that essence, Ice Code Games bent the traditional rules of turn-based games. This came in the form of a “game changer”: Hard West 2‘s new Bravado system, which means that shooting doesn’t automatically end a turn, and killing something refreshes a character’s action points.

“There is no limit to kill streaks this way,” says Pilski. “Bravado is not about shooting down one or two extra enemies within a turn – with proper planning, foresight and exploitation of synergies between characters, the posse will be a force of nature capable of taking down entire level sections before receiving a single blow.” 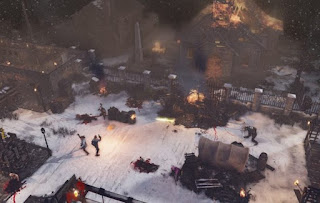 Ziemba adds that “Ricochet and Luck are both great examples of Hard West 1 mechanics that we’ve built upon, that also support that Western fantasy and make our game feel more aggressive.”

Ricocheting allows players – and eventually enemies – to fire around an opponent’s cover, bypassing their environmental protection with flourish. “Turtling won’t get you far in Hard West 2,” warns Ziemba. “You better get out there and get them before they have a chance to get you!”

The team also used the sequel as an opportunity to revisit Hard West‘s Luck system. Instead of acting more like a shield, Luck can now be used to increase the chances of a shot landing. As Ziemba notes, this change is in line with Hard West 2‘s “more aggressive” style of play and in tandem with Bravado’s potential for combos, he says “this game is not about luck – it’s all about skill.”

In tandem, Hard West 2‘s new systems push the game into feeling more like a Western. Pilski says that whenever the team designed something knew, it compared it to Magnificent Seven‘s iconic shootout scene and asked “did we manage to convey that vibe?”

“We put tremendous effort into figuring out what exactly makes a Western,” agrees Ziemba. “As Mateusz said, Magnificent Seven was a very important reference, but we also went through many other movies, from Sergio Leone’s and Sergio Corbucci’s Spaghetti Westerns, through post westerns like The Unforgiven up to modern Quentin Tarantino and Robert Rodriguez works – Django Unchained, From Dusk Till Dawn and Desperado.”

One of those entries – Tarantino’s vampire flick From Dusk Till Dawn – may seem like the odd one out, until you remember that Hard West 2’s stirrups are planted firmly in the genre dubbed Weird West, where Western fantasy meets the…weird. Pilski says the team found “the most attractive thing about the theme was this fresh combination of American Western and supernatural elements,” adding that it felt like “a rather unexplored setting, compared to all the cyberpunks, dark fantasy and zombie apocalypses” going around at the time.

To that end, Ziemba says Hard West 2‘s visual style was inspired by weird west graphic novels Jonah Hex and Just A Pilgrim. Pilski adds that the team also played pen and paper RPG Deadlands – “It was so cool for me personally to develop a game in the setting in which I played RPG sessions as a teen!” – and invited the game’s co-creator, Matt Forbeck, to co-write Hard West 2‘s story.

The result of Ice Code Games’ dedication to Westerns – and willingness to get weird – is immediately obvious on Hard West 2‘s Steam page, which orders players to “take control of a supernatural posse and catch the mysterious Ghost Train”. It’s probably not a sentence you’d read every day, which is exactly what Pilski was hoping for:

“We are really hoping to bring something new to the table, to maybe enrich the genre or at least propose a fresh approach with our aggressive, Bravado-centered mechanics. The turn-based genre is 30 years old – not counting chess. It should adapt to ever changing times and players’ expectations.”

“We are very passionate about games and we want to share this passion with other gamers,” adds Ziemba. “If someone enjoys our tactical game as much as we do, we will feel we have succeeded!”